The wrestling history and talent on this list is unbelievable. Any of the top 8 would be number 1 at most schools. 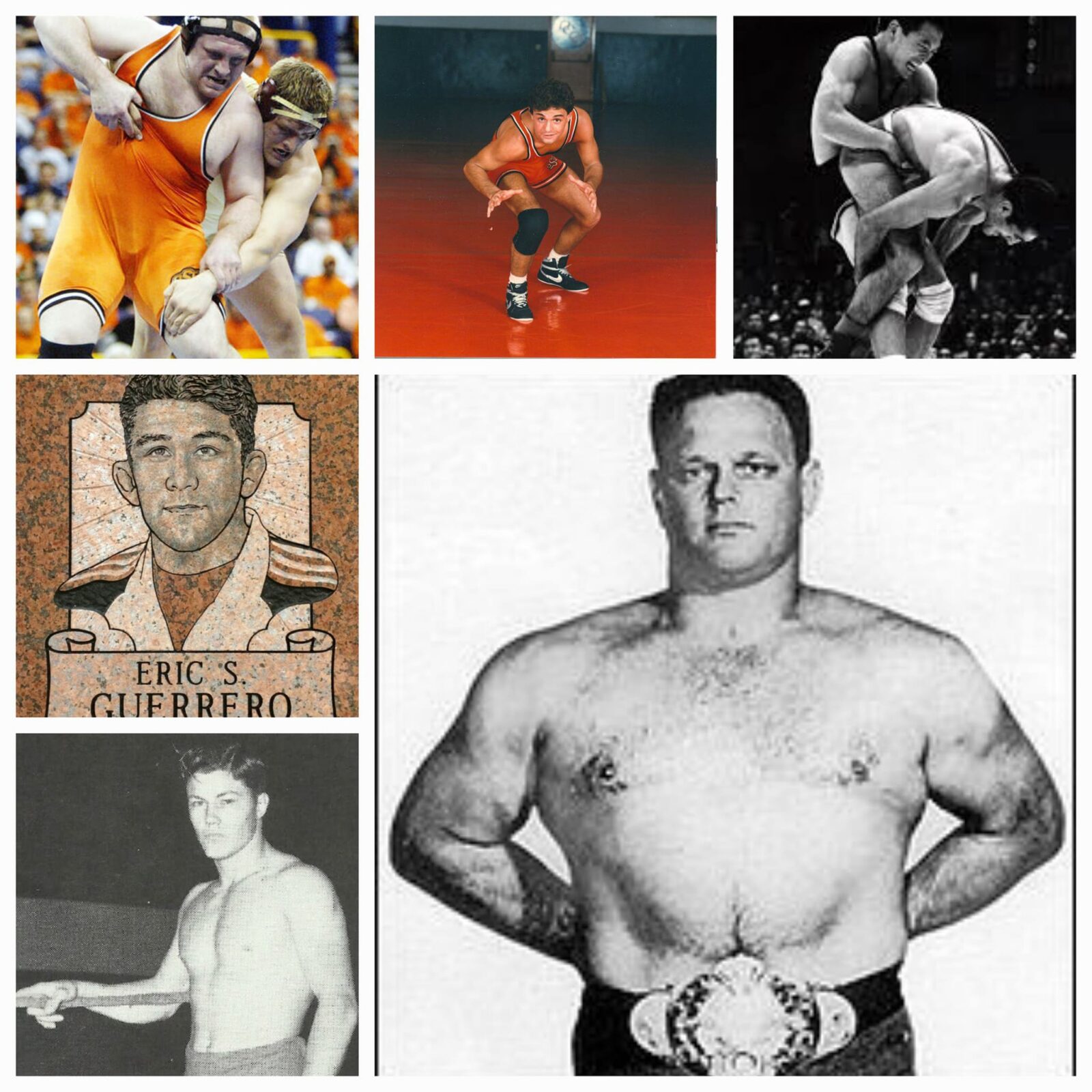 In high school, Kenny was a 4x state champion and a junior national champion. In fact he didn’t lost a single match from 7th grade through high school finishing with a record of 140-0. At Oklahoma State, he was a 3x all-american and won the 1984 NCAA title at 150 lbs. While racking up a 121-12 record, he led the Cowboys to two Big Eight Titles. After graduating he won a pair of world titles. The first came at the 1988 Olympics, the second was at the 1989 world championships. Monday followed that up with another Olympic birth, this time claiming a silver medal in 1992.

Guerrero came entered college, a blue chip recruit. In high school he won a 1993 Cadet World Championship, and a 1995 Junior World Championship. So it was easy to say that expectations were sky-high when he arrived in Oklahoma. Right away Eric didn’t disappoint, stepping into the lineup as a true freshman and battling all the way to a 5th place finish at his first NCAA tounament. Eric went on to become a 4x all american and 3x NCAA Champion, with a career record of 117-13. Upon completing his college career at Oklahoma State in 1999, Guerrero joined the U.S. world wrestling team, eventually earning a Gold Medal at the 2008 World Cup.

Jimmy was a 3x NCAA Champion, as well as a 3x World Cup Champion. While at Oklahoma State he established a 88-9 record, and had 44 wins by pinfall. Jackson was a true contributor for his team always willing to wrestle up or down a weight to help the team out. During his 4 years OSU went 61-5, and were the top team of the time period. During his senior season he posted a perfect 29-0 record with 11 pins. In 1976 Jimmy represented the United States at the Olympic Games, and in 1979 he became a Pan American Games Champion.

Doug was a 2x AAU National Champion and a 1x NCAA Champion. In 1959 he was the Nations Most Outstanding wrestler, and he also won a Pan American Gold Medal. In 1960 he made the United States Olympic Team, where he defeated 3x World Champion and former Olympic Gold medalist Emam-Ali Habibi to win the Gold Medal. Following this win he was named the Worlds Most Outstanding Wrestler regardless of weight, by the Olympic committee.

After being a 2x state finalist in high school, Hutton joined the army and was a veteran of World War 2. Upon returning home he enrolled at Oklahoma A&M. Which later became Oklahoma State University. In college Hutton was a 4x NCAA finalist, and 3x NCAA Champion. His junior year he lost in the finals to pro wrestling legend Verne Gagne. This just so happened to be the only loss of his college career. In 1948, Dick was a member of the United States freestyle team and finished 6th at the Olympics. As a pro wrestler Hutton was a 1x world champion, scoring a win over a true ICON of wrestling Lou Thez. Hutton finished his college career with a record of 42-1-1.

Henson was a two-time Oklahoma high school state wrestling champ, who then became a three-time NCAA champ for Oklahoma State in the late 1930s, widely heralded as one of the greats of that era and of all time. Henson won three NCAA championships at 145 pounds in 1937 and 1938, and at 155 as a senior in 1939. He was the first non-senior to be named Outstanding Wrestler at the Nationals, winning that honor as a sophomore at the 1937 NCAAs. In his three seasons as a starter for the Cowboys, Henson compiled a near-perfect 56-1 record, with 12 pins. In his entire college career Stanley was never taken down, and the only points scored against him, were escape points. Amateur Wrestling News magazine declared Henson to be the best wrestler of the 1930s.

Buddy Arndt has the distinction of being the only wrestler to win NCAA titles on both sides of a world war. He holds another record that will probably never be broken. Arndt, serves as the only wrestler in history to not lose a match in high school or college. Finishing his wrestling career with a perfect 34-0 record. What makes this feat even more impressive is the fact that David was wrestling up a weight during his college career. He won 3 NCAA titles at Oklahoma A&M which later became Oklahoma State University.

Yojiro was the complete wrestler, blending speed, strength and unparalleled skills to dominate all areas of the sport, takedowns, control, escapes and falls. Seldom did any opponent score offensive points against him. He was a 3x NCAA Champion, and was twice voted the NCAA Most Outstanding Wrestler. At the completion of his sophomore year, he returned home to Japan and won a Gold Medal at the 1964 Toyko Olympics. He returned to Oklahoma State and won 2 more NCAA titles. During his college career he never suffered a defeat, finishing with a perfect 58-0 record. In 1968, he returned to the Olympics and won his second Gold Medal, this time in Mexico City. Yojiro is widely considered the best college wrestler of all-time. Being as how freshman weren’t allowed to compete at this time in college, Yojiro was denied his opportunity to become the first 4x NCAA champion. But as it was, he was never really challenged on the mat, during his time at OSU. So its really hard to say just how good he really was.

Smith made wrestling history when he became the first wrestler to win four NCAA Division I individual national championships. Competing for Oklahoma State University, he earned NCAA titles in 1990, 1991, 1992 and 1994. He was a member of Oklahoma State teams that won the NCAA team titles in 1990 and 1994. He ended his college wrestling career with a 121-5-2 record. He set the Oklahoma State wrestling record for consecutive matches without a loss with 98 straight. Smith won three Oklahoma state high school titles for Del City High School (1987-89), and was twice named Outstanding Wrestler.

Considered to be one of the greatest wrestlers of all time, Smith is a 2x NCAA national champion, and a 6x world champion with two Olympic Championships and four World Wrestling Championships. At Oklahoma State, Smith was a 3x all-american, and 3x NCAA finalist. Winning the title his last two years in college. His record at Oklahoma State, was 154-7-2. In international competition Smith had an impressive 100-5 record. His list of accomplishments, is quite impressive and may never be broken.

Compare this list to Iowa and Penn State‘s top 10 team.