New dinosaur bones have been uncovered by a paleontologist digging at an undisclosed location in Missouri. 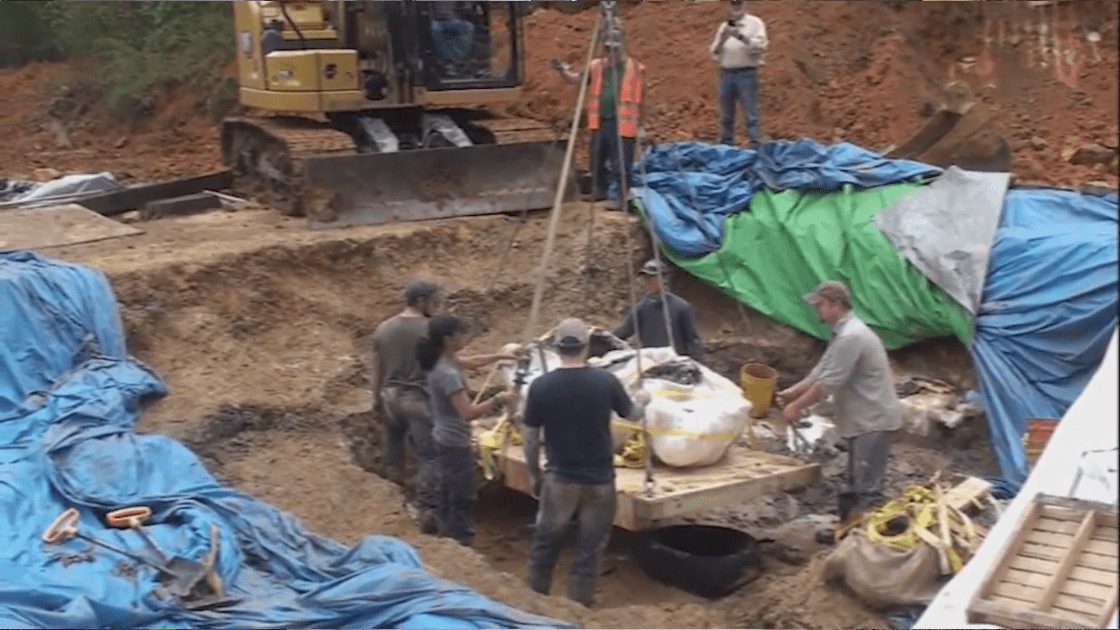 The St. Louis-based news station KTVI was first to speak with paleontologist Guy Darrough about his find. Darrough said during an interview with the station that he uncovered the juvenile skeleton of a Parrosaurus missouriensis, a dinosaur species described as duck-bill that grew to be 25 to 30 feet in length.

“I can’t imagine anything that’s more impressive than what we’ve discovered here,” Darrough told the station. He described the find as a “world-famous discovery.”

This particular kind of dinosaur has only been found in Missouri, according to Darrough. It is listed on state government websites as the official dinosaur of Missouri.

This particular kind of dinosaur has only been found in Missouri, according to Darrough. It is listed on state government websites as the official dinosaur of Missouri.

Dinosaur bones have been found in Missouri before, but these kinds of fossil finds are rare, according to state records. One set of bones was discovered on a farm in the 1940s while the family that owned the property was digging a well, according to the official website of Missouri’s secretary of state, John Ashcroft. Those bones were later identified as belonging to a Parrosaurus missouriensis, which underwent a few name changes along the way, and eventually became the state’s official dinosaur in 2004.

Those first bones were sold to the Smithsonian in 1943, Ashcroft’s office website said. The Smithsonian’s record of the fossils identified them as being found in Missouri’s Bollinger County.

The location of Darrough’s find is being kept under wraps as dig teams continue searching the area, he told KTVI. After Darrough found the juvenile skeleton, he said he contacted the Sainte Genevieve Museum Learning Center in Ste. Genevieve to alert them of his find and also reached out to Peter Makovicky, the associate curator of paleontology and chair at the Field Museum’s Department of Geology in Chicago.

Darrough told KTVI that Makovicky brought a dig team to the area where the juvenile skeleton was found and unearthed bones belonging to an adult of the same species. Darrough said a Tyrannosaurus tooth has also been uncovered and said researchers are “hoping there’s a whole bunch” of other fossils to be found in the area.

Makovicky described the area as “a really remarkable site” and “one of the best dinosaur localities east of the Great Plains” when speaking with KTVI.

On Tuesday morning, the Sainte Genevieve Museum Learning Center posted a link to KTVI’s article on Facebook and proclaimed, “Missouri is Dinosaur Country!” The learning center wrote that it would be the “Official Missouri Dinosaur Visitor Site” starting next month.

“The Sainte Genevieve Museum Learning Center is thrilled to be able to help Mr. Darrough and the crew of scientists at the Dig Site in spreading the word about this amazing discovery,” Abigail Kern, the learning center’s office manager, told Newsweek when reached for comment. “While the adult specimen is being transported to the Field Museum in Chicago, the juvenile skeleton will be on display within the laboratory of the Sainte Genevieve Museum Learning Center. We currently have the fossil displayed in the plaster jacket. Starting on the date of our Grand Opening, December 11, we will have paleontologists and preparers actively working on the fossil within the lab, which is viewable in our museum.”

Kern added that Darrough “is an amazing artist and preparer” and said the learning center “is working hard to bring his collections and wisdom to a wider audience.”

“Being able to work in tandem with the paleontologists of the Field Museum on such a monumental discovery is an exciting opportunity for us all,” Kern said.