Arizona State doesn’t have the deep history of say Oklahoma State. But what they do have is an impressive list of champions, and a budding program that is giving the best teams in the country a run for their money. In this article I will examine the entire career of 10 of Arizona States best wrestlers. 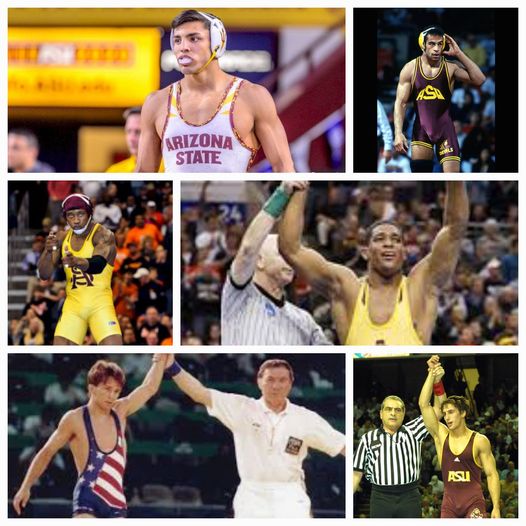 Dan’s wrestling career didn’t begin until he was a sophomore in high school, but that didn’t really seem to matter as in 1976 he won Junior Nationals in both Freestyle and Greco and was named the nations most outstanding high school wrestler. At Arizona State Dan was a 2x all-american finishing 4th and 2nd at the NCAA tournament. He would go on to have a hall of fame career in MMA. To date he is the only triple crown winner in UFC history.

Miller compiled 115 victories in a career that came to a close with the 1993 NCAA Championship at 167 pounds. One of the first two wrestlers in Sun Devil history to earn four All-America honors in a career, Miller also was a national runner-up in 1992. A three-time Pac-10 Champion, Miller was twice honored as the Pac-10 Wrestler of the Year and was a member of three Pac-10 Championship squads.

Charles was ASU’s first four-time wrestling All-American and was a two-time Pac-10 individual champion at 126. A two-time NCAA finalist, He helped ASU to a second-place finish at the 1990 NCAAs as well as three Pac-10 titles (1990, 1991, 1993). He collected 103 victories in his collegiate career, ranking him tied for 19th on the program’s all-time wins list at Arizona State. He also ranks 19th in career dual-match victories after he posted a 44-15-5 record in those matches. Inducted in the ASU Sports HOF in 2010, was the Sun Devil wrestling head coach from 2009-14.

Captured the 2011 NCAA Championship at 125 pounds in his senior season to cap a perfect 36-0 season and earn his third All-America honor… advanced to the NCAA Championships four times in his career, falling one win shy as a redshirt freshman of becoming a four-time All-American… finished fourth as a sophomore and seventh as a junior before winning the title as the No. 1 seed his senior season… advanced to the Pac-10 Conference finals all four seasons and won the title his last three years… capped his career with 122 victories, the eighth-most in school history… also ranks 10th all-time in ASU history with 53 wins in dual meets… one of the most prolific point-scorers in ASU history, won 75-percent of his career matches (92 of 122) with bonus points, including a school-record 47 technical falls… as a senior, set single-season records for bonus-point wins (31) and technical falls (24).

Bubba began his college career, at Penn State, and entered the program a highly touted recruit, he was the number 1 ranked 145 coming out of high school, and was the reigning NHSCA National Champion. At Penn State, he was an NCAA finalist, before transferring to ASU for his senior season. At Arizona state, his winning ways continued, as he stormed his was to an NCAA title. Finishing his career, as a 2x all-american, 2x NCAA finalist and a NCAA Champion. In 2007 Bubba won a Junior World Title in Freestyle. He has impressive wins over World Champions Jordan Burroughs and  David Taylor, and NCAA Champion, Frank Molinaro. Bubba is now enjoying  a career in MMA.

In high school Larkin was a two-time state champion with a 130-2 record. The 1998 Arizona Wrestler of the year, Larkin went 38-0 as a senior and added several national junior titles to his list of accolades. Eric had an outstanding career as a Sun Devil, finishing his career with an impressive 120-12 career record with 36 pins. He was also one of only four wrestlers in school history to become a 4x all-american, finishing 4th, 3rd, 2nd, and finally winning an NCAA Championship his senior season.  His collegiate career was capped with a perfect 34-0 season, and a Hodge Trophy. The first in school history.

Jones, who’s 134-21-3 record ranks fourth in wins at ASU, was a member of the 1988 NCAA Championship team while also earning three All-America honors and three Pac-10 titles. He also owns the ASU single-season record for dual wins with 22. A national runner-up at 118, Jones later went on to international success as he took the silver medal at the 1992 Barcelona Games. He was also a 1991 World Champion, and is also a Distinguished Member of the National Wrestling Hall of Fame. Zeke returned to his alma mater to helm the Sun Devil wrestling program in April of 2014. He was inducted into the ASU Sports HOF in 2004.

Arizona State’s all-time wins leader with a 147-17-3 record, St. John was the program’s first two-time NCAA champion, winning crowns in 1989 (158 pounds) and 1990 (167 pounds). St. John is one of two Sun Devils in program history to earn NCAA titles in multiple weight classes. A three-time Pac-10 champion, St. John was a member of four Pac-10 championship teams while also competing for the 1988 NCAA Championship team. St. John also holds program records for wins in a season (45) and career dual wins (71). Inducted into the ASU Sports HOF in 2001.

Zahid was a 3x Califorina state champion, a 3x Ironman champion, and was a 152 lb USAW/Cliff Keen Folkstyle National champion. He enrolled at ASU as a blue chip recruit with a ton of hype surrounding him. He made an imedieate impact on the college scene, quickly establishing himself as one of the top pound for pound wrestlers in the country. Hw was a 3x all-american, 3x Pac-12 Champion, and 2x NCAA champion. He ended his college career with an 88-3 record. Since graduating Zahid, has been competing in freestyle wrestling on the international level. He has already won his first Senior Nationals title.

Mollica was a two-time NCAA Champion (158, 1993 & 167, 1995). One of the most decorated wrestlers in school history, his first title came in his freshman season, making him the first ASU freshman in any sport to capture a national title. Mollica was a four-time Pac-10 Champion, including two at 158 pounds and two at 167 pounds, while also garnering All-America honors four times. At the NCAA Championships, Mollica placed first, fifth, first and fourth, respectively. He is one of two Sun Devils to win individual NCAA titles in two different weight classes, and was inducted into the ASU Sports HOF in 2008.

At Cal State Bakersfield, he won an NCAA Division II championship at 142 pounds before transferring to Arizona State University. As a Sun Devil, Saunders was a two-time Pac-10 champion and a two-time All-American, finishing second at 142 pounds in 1989 and third at 150 pounds in 1990. In the 1989 finals, Saunders took national champion Pat Santoro of the University of Pittsburgh into overtime, which ended in a 6-6, 1-1 deadlock. Santoro took the title on the 10th criteria. Saunders had a career record of 77-9 for ASU, which ties him for fourth place in school annals with a .895 winning percentage. He is also tied for fourth in dual victories in a season with 20 wins in 1989-90 and is tied for seventh on ASU’s single-season overall victories list with 40 wins in 1988-89. Saunders competed in six World Championships from 1991-95 and was a gold medalist at the Pan American Games in 1991 and 1995. He won a gold medal at the Goodwill Games in 1995 and was the U.S. Open national freestyle champion in 1991 and 1996. He was also a silver medalist at the 1996 Olympic Games.

At this point Dan is most well known for his legendary MMA career, and most people probably don’t realize he wrestled at Arizona State. In 1993 Dan wrestled a single season for ASU and even qualified for the NCAA tournament. Prior to ASU , Hendo competed at Cal State for a single season and had mixed results. In high school he was a 2x state place winner in California. Henderson seemed to struggle a bit in folkstyle wrestling, however he more then excelled in greco-roman wrestling. He won University Nationals in 1991, 1993, and 1994. He followed that up by winning Senior Nationals 3x, and even represented the United States in the Olympics in 1992 and 1996. The highlight of his wrestling career came at the 2000 Pam-American Championships, where he won a gold medal. After failing to qualify for the 2000 Olympics, Dan shifted his focus to MMA. In the world of professional fighting Dan concurred the world, winning titles in Rings, Pride, and Strikeforce. He was even the UFC 17 tournament champion. Dan retired for competion i 2016 after a legendary career, he was quickly inducted into the UFC Hall of Fame.